Some of you know I suffer from a bunch of mental illnesses. If society is anything to go by -which it is not- I'd be considered one of those crazy cat ladies. I've been in mental hospitals more often than I care to admit and needless to say, I do my utter best to prevent being (in)voluntary admitted again. One of my "problems" is having a bipolar disorder. (Although considering some of my other problems, it could well be something else with severe mood swings. The "experts" are still undecided, even after several tests and second opinion.) So that's the backdrop.

Currently I'm going through a deep depression, I've hit rock-bottom already a few weeks ago. If it wasn't for some suicide prevention measures I've put in place, I wouldn't have been around right now. Anyone who has suffered from a depression knows how hard it is to find anything that lifts your spirit, even for a moment. One of the things I always do is... Taking time to enjoy my first cup of coffee in peace and quiet, thinking about the things I still can and do have (like my amazing cat, who despite everything still chooses to be by my side). It sounds like a little thing, but it's certainly a moment that helps lifting the darkness a little. It takes time and effort.

I am an avid gamer and have been since the late 70's. Probably not in the sense most people think of gamers. I certainly have played a lot of platformers, shooters and the likes, but my favourites have always been the ones that didn't require instant reaction (one of my other issues). Games like Colossal Cave Adventure and the likes were amongst my early favourites. Later came Little Computer People, Creatures, the Sims and other mostly life simulator like games. I've played Sims Freeplay for years now, mostly on a daily basis if only to keep my Sims inspired, it's still a rather superficial grind-for-rewards freemium kind of game.

Back to a couple of weeks ago. For reasons unclear to me now, I stumbled upon Animal Crossing: New Leaf. It might have been due to my annoyance of depth with Castaway Paradise (mobile platforms) which is claimed to be inspired by Animal Crossing (now that I know better, it doesn't come close at all). I guess seeing some gameplay video did it for me. I bought a shiny Nintendo "New 3DS XL" along with Animal Crossing: New Leaf. Something new, interesting and distracting often helps while being depressed, although for most it's probably too expensive as a lift-your-spirit-while-depressed aid.

At first, I thought it was a cute and relatively simple game. Watering flowers, shaking trees for fruits, collecting fish, bugs, and fossils, talking to villagers and shopping. Boy, was I wrong in that! The more I played and searched on the net for answers about certain things, the more the depth of the game was slowly revealed to me. By now I've played well over 100 hours over the course of a little over three weeks and I still feel like I've only scratched the surface of it. Certain things like changing of the seasons and weather, along with things appropriate for the time of year weren't a big surprise. I did collect all the Spooky and Creepy items for and during Halloween (playing trick or treat was good fun), but that's only a fraction of what the game has to offer. While a lot of the activities tend to lean towards a chore -like watering flowers and making money- the game keeps surprising me with its cuteness. Somehow, amidst the darkness of my depression, the villagers keep making me smile with their often uplifting remarks and conversations. Or how about suddenly being given a present, just because they "like" you. And there is Club LOL, which is unlocked after certain requirements have been met (upgrade Nookling Junction to T&T Mart and having unlocked Public Works). While it mostly serves as a club at night (after 8pm), it also features Dr. Shrunk who performs stand-up comedy to give the player "emotions" (little expressions to use in multi-player). This may seem small, but there are 40 to collect and each has its own little performance. Since I'm talking about happiness received from playing, I think this one is appropriate, even if it's a poor joke. 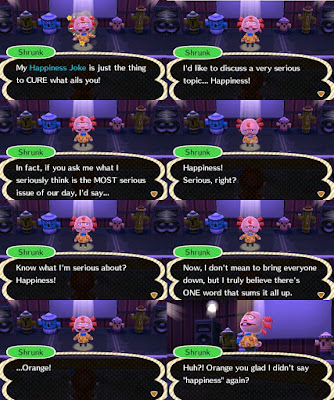 This morning I was even more surprised. Kody (a dog-like villager) asked me to play hide-and-seek. At first I thought it was just another conversation thing, although I should have known better since I played "charades" with some of them during Halloween (part of the "trick"s). I found myself transported to the Event Plaza and there was Kody with two other villagers. Kody explained how to play the game, the three would hide somewhere in town and I got 10 minutes to find them all. Much to my own surprise I was giggling and running around town soon enough. It lasted maybe 6 minutes in total before I had found them all, but during those 6 minutes I was actually very happy. Each of the three had their own unique and funny reaction to me finding them, which added to the fun. Once it was over I was rewarded with a present. (The present itself doesn't really matter, it was not something I wanted or needed). Of course, it's not just the villagers, or the little games, it's much more. The music (which changes throughout the day) is cheerful too. After that I resumed my "chore" of watering flowers, collecting fruits and selling them off at Re-Tail. Once finished, I saved and quit, got myself another cup of coffee and whilst sitting on the couch in thought, it started to dawn on me.

This all is my key to break -even for a short while- through my depression, no matter how "black" things have gotten. It's much stronger than anything else I've tried so far. (Medication not included). It doesn't last very long, the darkness does return. But thinking back or simply going back in the game and talking to villagers, certainly helps lifting my spirit for the time being.

I wish I had come across Animal Crossing 14 years ago, when the first of the series launched. It probably would have made a big difference in my life and perhaps even prevented some involuntary admissions. Time will tell what the long term effects will be like. Most games can't hold my attention very long, unless they have a certain depth to them. 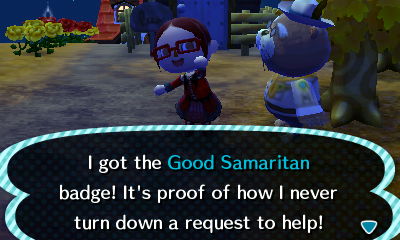 I'm glad I have embraced Animal Crossing now.
Posted by Perturbee at 13:30 No comments:

Email ThisBlogThis!Share to TwitterShare to FacebookShare to Pinterest
Labels: Gaming

The story of Janet

Over two years ago, Firemonkeys (EA) released an update called the "Neighbors" update for the Sims Freeplay. This was the update that allowed us players to visit towns of other players (through Facebook friends or Game Center friends). While this caused panic for some who used real names in the game, for others it was a wonderful opportunity to see the creativity of others with their own eyes. 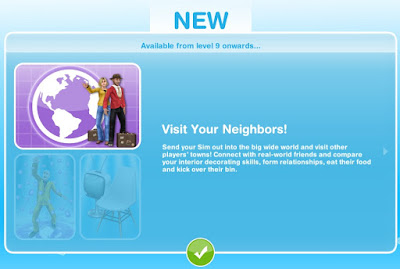 Of course this wasn't without bugs. Many encountered a bug -which I dubbed "Todd's Town bug"- causing the game to crash. The name for the bug is because people found their game stuck on "Visiting Todd's Town", despite having visited a friend. Some needed to reset their game and download the last save from the (Firemonkeys) cloud, others got a "ghost" visitor. In my case I got a Janet in one of my towns. Janet was (and still is) a ghost visitor, but she has her own "home". 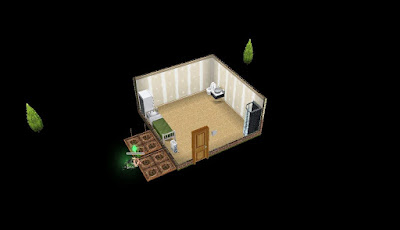 Her home is an empty lot. Not just empty as you'd find them in the game, but completely lacking ground, fences, mailbox, bin and roads. The good news was (and still is) that it has a grid to place things on it! So the obvious choice was... A space ship!

Over time Janet's space ship expanded, she even has two pets (which no longer is possible). Other things changed too. At first she didn't count towards the inhabitants count, then at some point she did. She was accessible through the job, hobby and relationship tracker, but during the Life Dreams and Legacies update she disappeared from the first two, leaving her only visible in relationships.That is still the case... 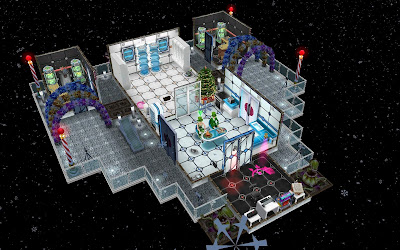 Today I was fooling around with my old Nexus 7 (model 2012) on which I had reinstalled an old custom Android version (Chameleon OS 0.8, Jelly Bean 4.3). I had also reinstalled Sims Freeplay and started a new game. When I decided to visit my own town from there, the game crashed. It crashed so badly that it didn't start again, not even after a reboot. (The nightmare some of you know all too well.) I was stubborn and didn't want to load up the cloud save, instead I tried a few possible solutions. I deleted the cache of the game, but no luck there, it still crashed. I rebooted into the TWRP recovery I have installed and deleted the Dalvik cache and regular cache, then restarted. After a few minutes I was back into my OS and much to my surprise, the game started and my Sim was back at home. I didn't notice anything odd and went on with the "Breadwinner" quest. At some point I opened up the relationship tracker and there was.... A Janet!!! She too has an empty lot on which things can be build. 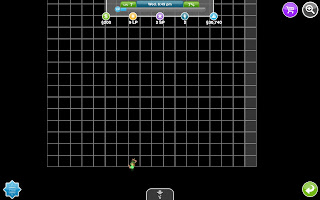 Needless to say, I tried again with one of my older test towns. But no matter what I did or which town I visited, I can't get it to crash again.

Posted by Perturbee at 17:57 No comments:

Three years ago there was an article about how game developers were receiving death threads over proposed changes in games. ( http://kotaku.com/5904367/another-day-another-death-threat-from-gamers-to-the-people-who-make-video-games )

With that in mind, it probably isn't very shocking to see that same (extremist) "gamers community" also can't tolerate critique, especially when it's a feminist perspective on games. But it should be (shocking, that is).

From: http://www.theguardian.com/technology/2015/jan/30/gamers-criticism-censorship
Games are part of the cultural landscape now, but somehow investigating and discussing them, especially from a feminist perspective, is actually dangerous. Critique has become warfare, and while it’s a war that no one can win, it’s a war that games as a culture can definitely lose.

“This is the Internet,” says Bogost. “And since the Internet is now where we live and work in large part, this is our lives. It is a horrifying thought.”
Why is that the (extremist) "gamers community" is so different from any other, like film buffs? Who do they resort to threats? Is this what those very games teach?
I do hope not.
On a related note, I do think that the perceived relative anonymity of the internet makes it easier for certain types to behave extreme.

In all, the loud and noisy few make the gaming world look bad. In its widest definition a "gamer" is someone who likes to play video games. By that definition I am a gamer myself, ever since Pong made it into the living room. But I don't feel at all associated with the noisy few!

Frustratingly, this environment disallows discussion about what the Tropes vs Women videos are actually arguing. “There are clearly valid critiques to make of Sarkeesian’s work [...] we tend not to see those,” says Ian Bogost, game designer and academic. “Instead we see way out of line Internet abuse.” Anthropy agrees. “It’s tough, because how do you open a nuanced discussion of someone’s work when another group is loudly shouting for her head?”